You have several options in preparing the back for a quilt.  The first option is using one solid piece of fabric.  Many fabrics are now available in 90-120″ widths and can accommodate up to a king size quilt.   END_OF_DOCUMENT_TOKEN_TO_BE_REPLACED 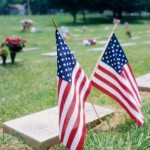 Memorial Day is a US federal holiday wherein the men and women who died while serving in the United States Armed Forces are remembered. The holiday, which is celebrated every year on the final Monday of May, was formerly known as Decoration Day and originated after the American Civil War to commemorate the Union and Confederate soldiers who died in the Civil War. By the 20th century, Memorial Day had been extended to honor all Americans who have died while in the military service. It typically marks the start of the summer vacation season, while Labor Day marks its end.  Many people visit cemeteries and memorials, particularly to honor those who have died in military service. Many volunteers place an American flag on each grave in national cemeteries. END_OF_DOCUMENT_TOKEN_TO_BE_REPLACED 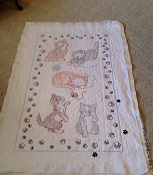 This project was a pre-printed panel that was hand embroidered and custom machine quilted.  The original panel design includes the teal colored embroidered border.  An additional rectangular border was machine quilted to set off the kittens and give the appearance of an inside border of paw prints.  Each kitten was quilted with an outline stitch, and various other items (eyes, ears, etc.) were also quilted.  The ball of yarn and butterfly were quilted using an outline stitch plus additional stitching.  Diagonal lines were added to the interior rectangle.  Each embroidered paw print was outline quilted and connected with a wavy line (similar to butterfly line).  The outer border was quilted using an echoed paw print design and connected with wavy lines.  Three paw prints from the flannel backing were hand appliqued on the lower right hand side to give the appearance of a kitten walking on the quilt.  A white thread was used to blend in with the quilt background.  The backing was a white flannel fabric with black paw prints. Embroidered work was enhanced and not quilted over. 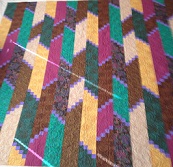 This quilt was pieced using fabrics from a recent Nebraska Shop Hop.  It is a modified Log Cabin Quilt design utilizing various lengths of fabric strips connected by blocks of smaller squares.  Several colored fabrics were used to match the multi-colored floral print, which was the focal fabric.  A golden yellow thread was used in quilting to bring out the hints of gold found in most of the fabrics.  The project was quilted using the Chamomile design (by Denise Schillinger) to highlight the flower in the focal fabric and the swirling design found in several of the fabrics.  The muslin backing and the basic stripe pattern of this quilt are both enhanced by the swirling movement of the quilt design used.

Have you found a fun fabric panel, but not sure what to do with it?  Don’t stress, you have several options.  You can add sashing and borders, cut the panel apart and use as many sections as desired, etc.  Then let the fun begin. END_OF_DOCUMENT_TOKEN_TO_BE_REPLACED